The additions over a standard XF are pretty subtle – even more so since we have this car in silver.

The XFR sits 27mm lower on 20” 7-spoke turbine-style alloys;   Up front, the most noticeable difference is with the larger lower front air intakes + chrome surrounds on the bumper.   These are coupled with a pair of small bonnet louvres higher up and, in the later incarnations, the central grille is black adding a bit of contrast. 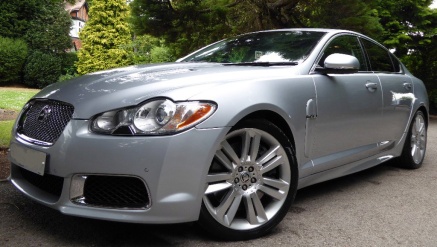 Sill extensions run down the side (the PistonHeads picture below shows the profile a bit better);   and quad-exhaust pipes with a subtle spoiler complete the look at the rear.

Quad tail-pipes give away the XFR*

It has a pretty good stance,and even though I preferred the 5-spoke pepper-pot alloys of the SV8, these ones reminiscent of the C-XF Concept aren’t exactly ugly (and at least do say ‘Supercharged’ in the centre).

The differences inside aren’t as blatant either.   It’s immediately darker than normal with the black roof lining and dark wood trim.   We have these big bolstered sports seats which luckily don’t rob any rear legroom, but they do indicate what it’s like to sit on a cow on steroids. ‘R’ icons can be found on the seats and the dash, and the silver dash trim itself is a different texture.

It’s standard XF affair in here otherwise, which is good in its own right, but what was a modern car back in 2007 is just starting to feel a bit old now.  It’s still a special place to be – so what was different at launch still has an effect now,  but minor things like the touch screen and touch sensitive glovebox have had to be updated.

Dash is starting to age a bit now after 5 years*

Screen graphics are the first to look dated

Go for a later model and the interior will be more two-tone since the 2011 facelift, and so there’ll be more contrast in the newer models. But, the XF has become a generation behind now and it seems it’ll keep going until Jaguar squeeze every bit of life out of it before the next one comes along.