There’s an alleged 20% increase in cornering abilities for the SVR, and in all fairness to the base RRS Supercharged, there hasn’t had to be any substantial changes made to reach this; I like that – more of a revision exercise for SVO, rather than wastefully developing from scratch all over again.

We’ll start with the ride. Land Rover would shoot themselves massively in the foot if they ruined a Range Rover’s ride, but it’s quite a feat that they achieved the ride / handling balance for this SVR.

In normal mode, the ride is quite firm but it just feels like the early stages of air suspension when it was a bit lumpy at low speeds – it can still waft over everything else at higher speeds. It’s very well controlled too with no secondary bounce; you feel a nudge and then it’s gone.

The biggest trick SVO has pulled off though is that you do forget about some of the typical quirks (or compromises for some) you get with SUV dynamics: the SVR feels much smaller than it looks on the move and the body doesn’t feel like it’s floating on stilts.

The sharpened steering doesn’t endlessly turn now with only 2.8 turns lock-to-lock and you don’t sense the strange nose lifts or dives under accelerating/braking. I wouldn’t be surprised if there still was some, but you get the feeling those aperture angles aren’t actually there any more to prevent the bumpers scraping under those forces!

The combined lack of body movement and quick steering makes it feel planted when cornering with the sense of agility from something with a lower centre of gravity – and this is already without having to be in Dynamic mode.

When I first experienced an Evoque down a country road back in 2012, I was amazed by the lack of body roll compared to a Freelander – and that was already a “car-like SUV” at the time. This is the same after 3 years; the game has moved on again.

Dynamic mode alters the usual throttle, damping and steering maps with the exhaust valve permanently open. For once I could clearly feel the benefits, but it’s pleasing to know the standard default auto position is more than good enough as it is compared to what we’ve sampled before.

Nudging the gear lever into Sport in this mode again holds the gears at the rev limiter. The gearshifts on the 8-speed auto have been recalibrated to be up to 50% quicker, but this is negligible anyway considering the standard ZF auto is good enough as it is.

There’s extra cooling for the Brembo brakes but I suspect you’d be hard pushed to exploit this on road use, and the 21” tyres provided an engaging enough drive in the corners without being particularly noisy either.

Your average driver would need to go quite far to find the shortcomings now, yet its quite bizarre how something on 21/22”s can still be taken off-road and wade up to 850mm too. 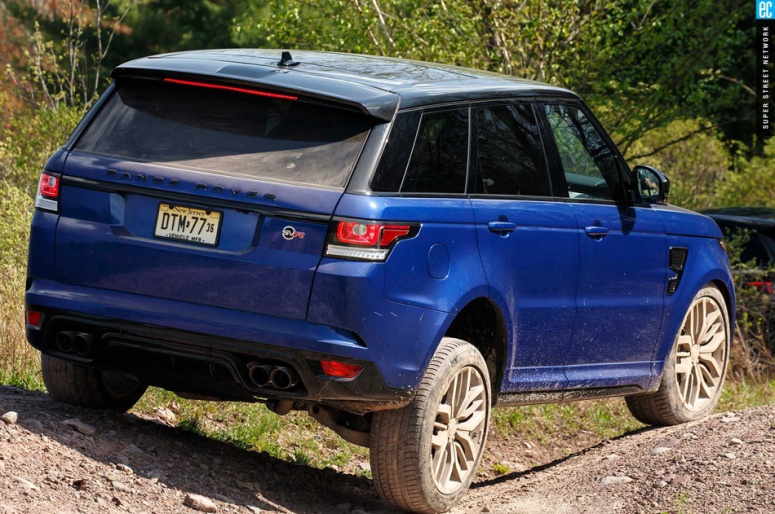 Otherwise if you settle down to a cruise, it’s just as refined as a regular RRS. It’s not the hardcore, intense-personality type, buzzing away all the time.   The engine becomes discreet and the noise levels diminish.

I’d been led to believe by those at Land Rover that the standard RRS V8 already sounded good; and judging by the video at the bottom, I believe them. The SVR is even louder, more aggressive; a slight nod to the Bowler Wildcat but without the harnesses and exposed metalwork inside.

Its full-on theatre – and for some its even more so than the F-Type Coupe R. A symposer has been fitted too, but mainly thanks to those larger diameter exhausts, the volume of noise matches the sheer size of this car.

Perhaps it’d might benefit from a comfort-throttle setting as any prod of the throttle can wake you and any pedestrian up unexpectedly.  A result of a sneeze or involuntary twitch can bring the noise bursting back into life!

Leave the dual-stage Active Exhaust button switched off and it’ll cruise relatively quietly on gentle throttle openings up until 4000rpm. You still get the pops and bangs on the overrun mind, so you won’t contain all the aggression!

I might occasionally feel a little self-conscious in it, but I have no doubt that people hearing this V8 go by would be much better than hearing what was on my playlist…

I imagine this would be the ultimate cameraman’s tracking-car if you spent a lot of time filming from the boot!

What it sounds like with a pro camera (donations welcome):

How they’ve done it