With the help of that shortened 7-Series platform, this latest 5-series has expanded into a proper full-sized saloon. The large bodywork outside translates into a huge interior too where space is in plentiful supply.

At first glance, you’d think all of these inflated dimensions were made to tailor for the American market; with those big doors and seats you feel small and insignificant – like a child again – with a reduced ability to peer over the door-window line! You’ll be glad to have those standard front / rear parking sensors.

It reminds me a bit of the original Skoda Superb when they just went with the car from the class above; it pays dividends for rear passenger space. There’s not much foot space beneath the low front seats, but even with the transmission tunnel, there’s plenty of room for 3 rear passengers.

We could argue what the point of it is though considering we normally see these being driven by just one person…. using all that rear space to hang up their single suit jacket.

Boot space in the 5-Series is plentiful and on a par with rivals, evidently all that extra space has gone into the cabin!

Folding rear seats are an optional extra though, and there’s no boot handle either, meaning it wont take long before you get grubby fingers.

For the rest of the cabin…
The huge, broad seats are pretty comfortable for long journeys; they might not look particularly bolstered but they don’t feel quite as flat as I’d originally feared.

There’s plenty of storage space dotted around, although those vast door cards hold surprisingly little in their bins!

Even the integrated armrest and centre storage cubby is larger than normal.

Elsewhere, the steering wheel controls are nice and simple to use, the dials are clear…. 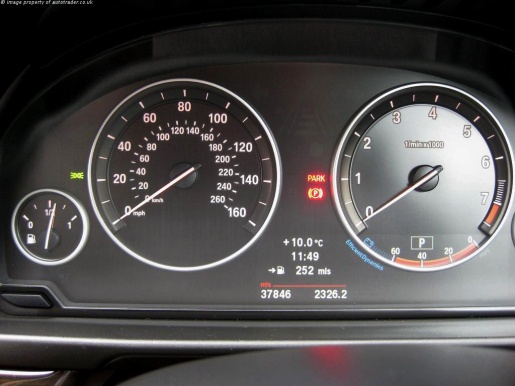 …and that huge optional centre screen is a boon.

It pretty much fits in with the rest of the oversized features in the cabin, and I suspect the standard screen would look lost in comparison!

There are quite a few same-sized buttons to select from on the centre dash, but there’s just the right amount to get used to without it becoming overbearing.

The rocker gearbox selector seems a bit weird at first and it’s probably the weakest point in here – you wont be selecting any gears in a hurry whilst manoeuvering!

iDrive can look intimidating at first as always, but it works and is worth the time spent getting used to it.

In short, the practicality is all here but it’s just not particularly pleasing visually. Combined with the ride and NVH levels, the 5-Series is a relaxing place to spend time in, but the cabin design / materials are just a bit dull, dark and scratchy.

Our XF was comparably more cosy in all dimensions and pales into significance for sheer space. The Jag’s cabin can feel a little less solid too, but it is altogether more inviting and more visually appealing.

Typically, it’s the plethora of options available that massively hikes up the list price.  As well as offering the amount of space nearing towards the 7-series, you can benefit from some of the technology on offer from there too, such as night vision and adaptive cruise – but only if you pay for it.