There’s only one subtle difference made for the Ultimate version of the XJ; the suspension’s been tweaked to further improve the ride for those rear passengers – i.e. the ones who most probably paid!

The ride is smooth enough with only small nudges occasionally felt through the seats, and while that’s completely tolerable for me – no, it doesn’t ‘glide’ over. There’s an ever so slightly firm edge to the ride for a luxury car and I can see why this would be an issue for some – especially for those who’d paid a premium in the first place!

It may not be comparable to some rivals but that’s the trade off for having some degree of body control. Arguably if you are buying a luxo-barge, it’s still a barge at the end of the day, so having body control may be irrelevant to most people. The argument for being a driver’s luxury car will be a moot point for those who get chauffeured around too – the odds being that if you can afford this, you can probably afford a driver!

But if it’s good to drive, your driver might have a reason to stay with you longer. Which might be helpful if you have an issue of high turnover drivers.

The controls are just as responsive as those in the XF, so nothing’s been diluted or delayed in a bid to lower the driver’s responses / heart rate – it’s definitely not a Bentley/Rolls Royce with infinite steering turns lock to lock. And since the XJ essentially weighs the same as the XF too, it doesn’t tumble through the corners either.   A result of developing the XJ in long wheelbase first, rather than the other way round means there’s only a 17kg weight increase.

’Dynamic mode’ still turns the dials red and gives a little tug of the seatbelt; this again may not be exactly necessary, but at least you’ll know your driver acknowledges you’re in a hurry if you see this! 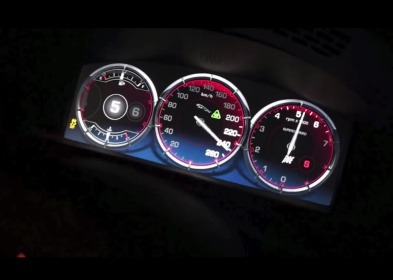 Unsurprisingly, the exhaust noise isn’t that loud; it’s more towards the XFR end of the scale – there certainly is a nice rumble to be heard but as it’s primarily built to be luxurious, don’t expect the volume to be on the XK’s level of roar! A hint of supercharger whine is a bonus though for those sat up front.