Never ever, have I had such a reaction about a car….or in fact anything I’ve possessed before…and now it seems to be a common response.

I’d had enough. After an overbearing moment of realisation from running a hot-hatch, I’d come to the conclusion that:

The faster you are, the more you get held up by everyone else.

When dozy town drivers pootle about without any sense of punctuality, Doris in her Jazz suddenly isn’t the main issue any more.

It’s time to switch to the dark side and see what it’s all about; ignorance appears to be bliss! Screw it, who even needs mirrors?

So with the Land Rover Defender coming to an end after 68 years of production, we’ve decided to take the plunge and get one. I’ve never really had an old-fashioned car, and since I missed out on the original Mini while growing up, I didn’t want to miss out again.   Sure, it’s going to be sloooow but since winter is coming up, I’d be struggling to drive the Fiesta ST quickly anyway.

So, it’s time to see what being pedestrian and having this iconic car is all about.

After a bit of prior research, it sounded like the standard headlight bulbs were pretty weak and about as strong as a torch. So I upgraded with a set of these.

After picking up the car though, the standard ones were neither as yellow or as useless as I’d originally feared, but upgrading has definitely made an improvement. 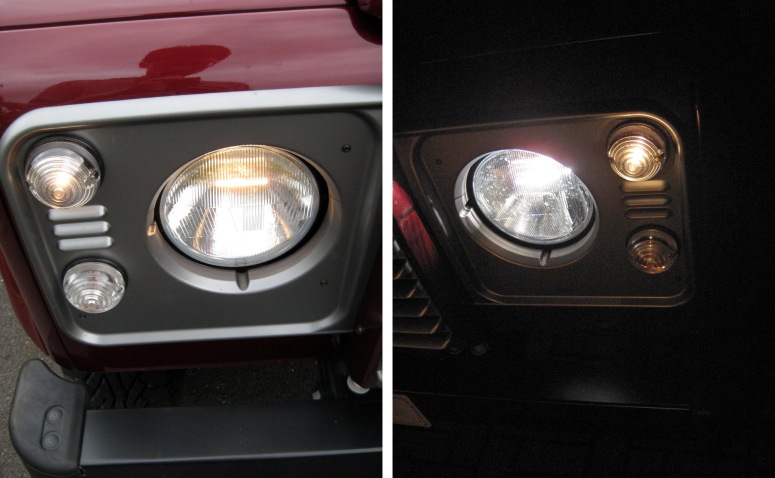 Was always tempted by the official cage-like guards but as it turns out, you have to bolt/rivet them onto the body itself. This was enough to put me off, but more so because: if you do hit something, it’ll damage the bodywork instead…. logic?

These ones from outbound4x4 stay on ALL the time!

Not the most foolproof mod, but the live current running through both courtesy lights is still enough to dimly light the LED’s – even when all doors are closed – and as they run on the same fuse as the clock, the live current is permanent.   They have coincidentally doubled as mood lighting though while driving!

It obviously doesn’t drain the car battery, but you do manually switch the lights to the ‘Off’ setting every time you leave to preserve the bulb’s lifeline.

Essential, for both dirt and noise insulation purposes. But as it says ‘Defender’, it’s not cheap!

With those large rear windows at head-height when walking past, we thought it was best to tint these up. With 9 panes of glass in total, this took a few weekends to fit by myself, including a couple that had to be re-done!

Cutting up the 35% window film…

…Halfway through the side windows, the frost amplifying the difference!